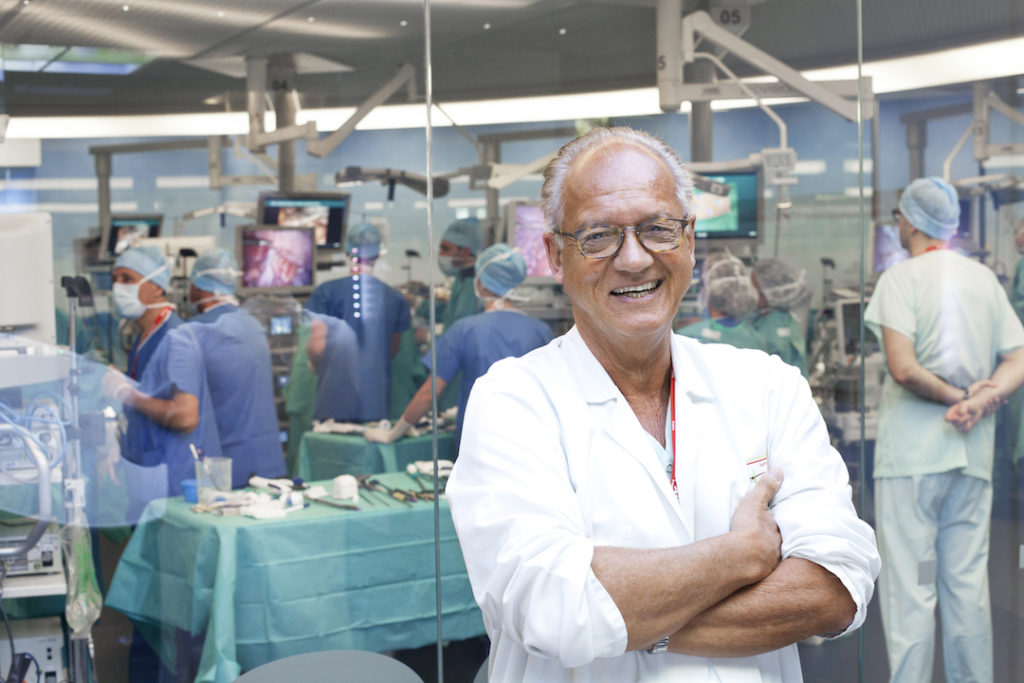 In 1988, I had the chance to attend a joint presentation given by Philippe Mouret and Jacques Perissat regarding the first laparoscopic cholecystectomies. The impact it had on me was immediate. When I came back to Strasbourg, it did not take long before I obtained two laparoscopic units.

As a result, our teaching hospital was one of the first facilities to develop this technique.

I had a mentor, or rather a “hero”, Richard Satava. He was the person who highlighted the development of artificial intelligence in medicine during a conference he gave in Germany in 1991.

He spoke of the future power of the Internet and surgical robotics, virtual and augmented reality, which are concepts that did not exist before. I understood less than 20% of his lecture. I came back to Strasbourg, and after a discussion with our partners, we decided to create the IRCAD Institute, the aim of which was to make the concepts of Richard Satava a reality.

The answer is twofold:

No need to be an overseer to assert that artificial intelligence will play a major and decisive role in medicine and in surgery in particular: not only preoperative strategy as can be demonstrated by “Watson”, but also the concept of augmented surgery where artificial intelligence will allow for an augmented vision through the development of 3D reconstruction of medical images, with increasingly precise maneuvers during robotic surgery and certainly through a real-time capacity to analyze situations, making it possible to prevent any severe complications and enhance intra-operative strategies.

Let me quote Jean-Paul Cachera as an example. “It’s my extreme pleasure to enter a human body: each time it is a moment of respect and reverence and reflection, as if entering a temple. Most importantly, be harmless, respect what still looks healthy, be discreet in this dissection inside a fellow counterpart; and make things right again neatly before leaving as I have no right on any human body, just duties”. The answer was made more complex by the fact that the surgeon must constantly innovate and no answer is provided about “ethical commitment”. You can just listen to the splendid conclusion in Peter Angelos’s lecture regarding “Ethics and Innovation”: Are we honest with our patients? This isn’t really a conclusion though, is it?

Written By: The Hawk

ThoracicVideo Gallery
T. D'Amico
EndocrineVideo Gallery
A. Parisi Primary aldosteronism is a potentially curable cause of hypertension; it occurs in about 1% of hypertensive patients. In the video reported
Video for patients
Robotic thyroidectomy is one of the latest acquisitions of robotic surgery.