Researchers have developed a next-generation bionic hand that allows amputees to regain their natural sense of touch and proprioception even in long-term applications. The results of the studies, which have been recently published in Science Robotics, Neuron and Annals of Neurology, are the culmination of ten years of robotics research.

The next-generation bionic hand, developed by researchers from EPFL, the Sant’Anna School of Advanced Studies in Pisa and the A. Gemelli University Polyclinic in Rome, enables amputees to regain a very subtle, close-to-natural sense of touch. The researchers stimulated the nerves of the amputated arm using implantable electrodes with signals very similar to the natural ones, succeeding in “imitating the colors” of the evoked sensations of the various types of receptors and related nerve fibers present in the fingertips of the hand. This has brought greater realism and greater functionality of the feelings experienced by patients.

Moreover, the scientists managed to reproduce the feeling of proprioception, which is our brain’s capacity to instantly and accurately sense the position of our limbs during and after movement – even in the dark or with our eyes closed.

The new device allows patients to reach out for an object on a table and to ascertain an item’s consistency, shape, position and size without having to look at it. The prosthesis has been successfully tested on several patients and works by stimulating the nerves in the amputee’s stump (see picture attached). The nerves can then provide sensory feedback to the patients in real time – almost like they do in a natural hand.  The system was successfully exploited and tested by three patients for six months. We believe that our findings support the hypothesis that intraneural stimulation represents a valuable clinical solution to provide sensory feedback to amputees and that this approach is ready to be tested with a larger cohort of patients during long-term clinical trials outside the controlled hospital environment. They are the result of ten years of scientific research coordinated by Silvestro Micera, a professor of bioengineering at EPFL and the Sant’Anna School of Advanced Studies, and Paolo Maria Rossini, director of neuroscience at the A. Gemelli University Polyclinic in Rome.

Current myoelectric prostheses allow amputees to regain voluntary motor control of their artificial limb by exploiting residual muscle function in the forearm. However, the lack of any sensory feedback means that patients have to rely heavily on visual cues. This can prevent them from feeling that their artificial limb is part of their body and make it more unnatural to use. Intraneural stimulation re-establishes the flow of external information using electric pulses sent by electrodes inserted directly into the amputee’s sensory nerves. The neural stimulation was delivered according to the bionic hand sensors giving to the patient a real time sensory information.

Through an interdisciplinary approach, which integrates practices deriving from neuroengineering, clinical neurology, and robotics, with computer simulations of the behavior of neurons, it was possible to ascertain that by stimulating the peripheral nerve with information very similar to those that natural finger sensors would provide under normal conditions, the patient is able to receive more natural and effective information.

Robotic hand worn by different transradial amputees. The bidirectional system is fully portable also outside of the hospital. 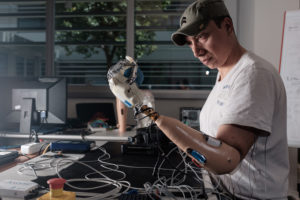 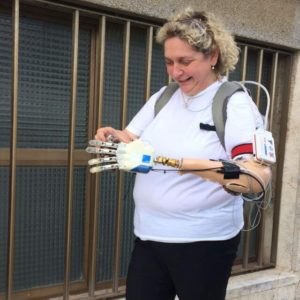 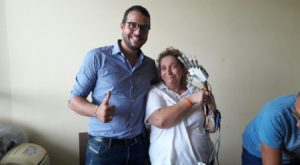 Other prestigious European research centers, such as the universities of Cagliari, Montpellier and Fribourg (Germany), also contributed to the study. Funding was provided by the European Commission, the Swiss National Centre of Competence in Research (NCCR Robotics), and the Bertarelli Foundation.